Global interest in Knowledge Unlatched continues following the success of its Pilot project. KU has been asked to speak and present at various events in Australia, the Netherlands, the UK and the USA. Below is a rundown of past and upcoming events where KU will be represented.

Frances Pinter attended the OA Awards Ceremony as part of the 80th IFLA General Conference and Assembly in Lyon, France.

The jury of the IFLA/Brill award said that they are ‘deeply impressed with the simplicity and elegance of the original concept, with the daring scope of the project, bringing together libraries, publishers and other organisations from around the world, and with the highly successful outcome of the pilot phase that tested the concept.’ 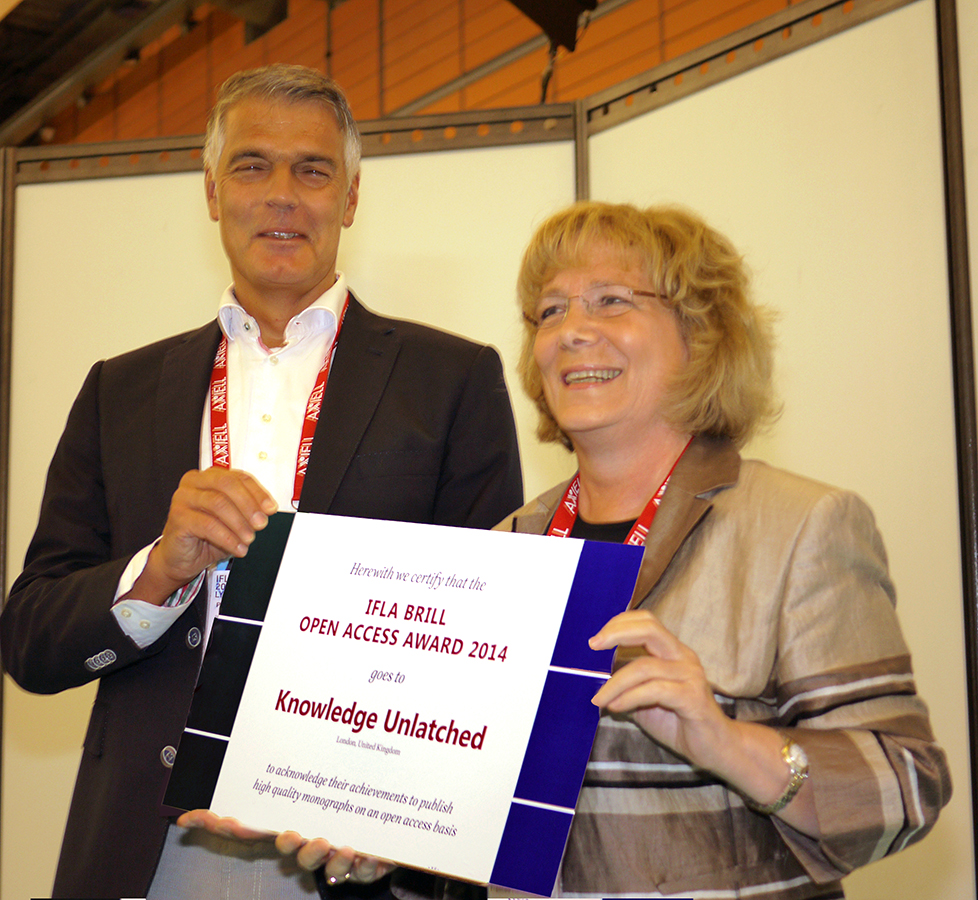 Frances Pinter was asked to present the KU business model at the ‘New Commercial Business Models for Antibiotics – What Can Be Learnt From Other Industries?’ event, along with BAE Systems and EDF Energy.

Lucy Montgomery participated in the ‘Resource Sharing in the Age of the Ebook’ session along with Ryan Litsey and Kenny Ketner (Texas Tech University), Martin Halbert (University of North Texas) and Mike Roy (Middlebury College).

Frances Pinter spoke at the University of Leeds along with Brian Hole of Ubiquity Press on the topic of ‘Open Access Publishing for the Humanities’.

Frances Pinter was invited to give a talk for the ‘Open Access in the Humanities’ event along with MMU Professor Cathy Urquhart and Dr Martin Eve (Open Library of Humanities) as well as a “tradeshow” with representatives from Open Access publishers.

The University of Manchester’s OA Week

A seminar was held for academics and researcher support staff to learn about Open Access at Manchester, including new policies, funds and developments. The seminar included presentations by Professor Luke Georghiou, the University's Vice-President for Research and Innovation, and Frances Pinter.

Eelco Ferwada, OAPEN kindly presented on behalf of KU for the topic ‘Open Access: The New Beginning?’, speaking about 'Knowledge Unlatched: Publishing open-access books without costs for the author'.

Frances Pinter gave a presentation on ‘Navigating Through the Rapids of Change’.

Frances Pinter will be participating in the Open Access monographs session on the progress of KU on 21 November.

Lucy Montgomery will be speaking at this event which aims to encourage discussion on issues related to academic publishing.